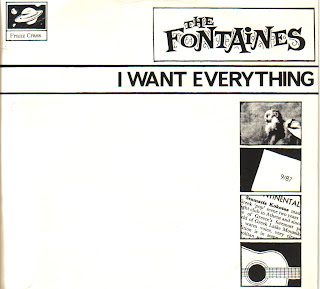 Recorded in three days in August 1987 this superior independent release vaulted into the pop world to a clamour of indifference. Unfair treatment indeed. With lyrics redolent of Morrissey after an all night kitchen sink drama video session they may well have been ready to perch on the throne of misery the Smiths were about to vacate. Nothing more was forthcoming though and this slice of pulchritudinous pop was consigned to the carrier bag of discarded dreams.

The band consisted of Brian Green on vocals, Duane Fontaine on guitar, Louis Jones on guitar, Andy Reynolds on bass and Ed Grimshaw on drums. I had an email from Dr. Andy Reynolds who tells me that Louis Jones and Ed Grimshaw went on to form the Warm Jets and Brian Green went on to record an LP with Hugh Cornwell, then went to Nashville and now teaches song-writing MA in Bath. Apparently there exist videos of the band performing other songs which may one day appear on Youtube. Dr.Reynolds is now a reader in medieval archaeology at the Institute of Archaeology in London. Perhaps five hundred years from now someone will dig up an old Fontaines record and marvel at this gleaming example of mid eighties pop.

fontaines i want everything.mp3 -
Posted by Rupert Cook at 8:33 AM