Caught in the maelstrom 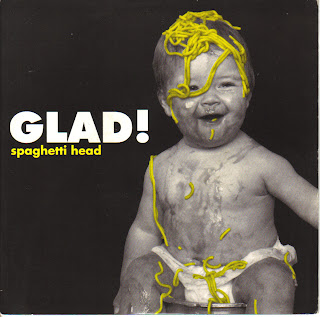 It's 1992 and Spaghetti Head is caught in the maelstrom of the indie dance. Do you miss those times? If you do here's a band that sound like the Happy Mondays, Farm and the Soup Dragons. Steeped in the mood of the moment they weren't because the indie dance had been murdered in the mosh pits as Nirvana and their head-shaking hordes swept through the venues of Britain. Grunge was a big sponge that soaked up those who were all Bezzed out.

It was the girlfriend who directed me towards this lot and as she has a well trained ear I had no hesitation in rescuing this from a charity shop in Ruislip Manor. It's an unpleasant cover and Spaghetti Head is an atrocious name so even before this hits the decks you're consciously disliking it. Once it gets its groove though you feel compelled to rotate wildly. There's no info on the band and the B side is an instrumental version of Glad! Did they release anything else? It's doubtful considering they couldn't even supply an original B side. This really is the behaviour of a bunch of session musicians.

Food and band names, not a good idea (I'm sure they eat toads somewhere).