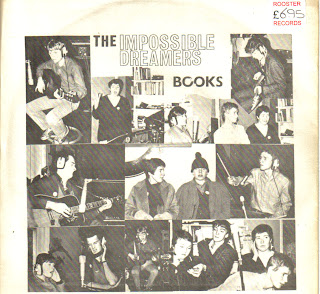 This single was recorded on January 7th 1980 thereby missing any critical appraisal from Mr.45 Revs. Books Books Books, the stand out track is, freakishly, a tribute to words rounded up and herded onto pages of books. This first release on Merciful Release shone a light on four fine songs of unrefined charm plus one throwaway track. The Impossible Dreamers was Caroline on vocals, Nick on guitar and vocals, Justin on bass, Colin on guitar and Simon on drums with various guests contributing handclaps.

The first three named held the group together for most of the eighties. Though they never got within a "now then, now then" of the charts they deserve a cigar for tenacity.

In 1982 they released Life On Earth, a Y (label) reg excursion into post punk. B side Spin was apparently a dance sensation in a club in New York. In 1984 came This House Built On Sand, a bright zingy number they could have stolen from the Bhundu Boys. In 1985 came August Avenue, a Johnny Marr production, which was a pleasant, if rather anaemic, pop effort.

By now RCA had extended a corporate hand and in either 1986 or 1987 they released one of their strongest singles, Say Goodbye To No One, which was stuffed with drama courtesy of Abbaesque piano and Caroline's sky-skidding vocals.

impossible dreamers books.mp3 -
Posted by Rupert Cook at 8:58 AM 3 comments:

Labels: August Avenue, Books, Impossible Dreamers, Life On Earth, Say Goodbye To No One, Spin, This House Built On Sand

Dutch punk I am completely ignorant of ensures Lpman can put a down payment on a small windmill. The Squats, who?

Lpman returns with a single by the Squares, a band of minor interest. This is the original issue of No Fear on Airebeat before Sire scooped them up and they re-recorded it to meet a no better fate than its predecessor. I picked up the second version in an Oxford charity shop a few years ago. These shapes shifted for a few pounds short of £40.