Posted by Rupert Cook at 1:45 PM No comments: 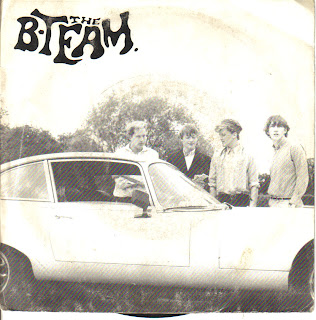 Yesterday a much sought after mod revival single turned up in one of my esteemed haunts, Alan's record shop in East Finchley. The B-Team single was as hard to pin down as the A-Team. Three or four times it refused to succumb to my bidding on ebay. Not in pristine condition but worth the £4 I paid for it as it last sold on ebay for around £60. Outbid at the last that day finding it yesterday was a succulent joy.

Released on the Diamond Record Corporation in 1985 it is apparently the label's eighth attempt at chart success. So what are the others?

The B-Team consisted of Tony Vessey on bass, Kelvin Davis on guitar/vocals, Doug McNair on keyboards and Steve Bessemer on drums. On the sleeve the band are nonchalantly hovering around an E-Type Jag, ostensibly void of all envy but secretly hoping record sales will boost their accounts and enable them to ditch their Vespas and secure ownership of the sleek contraption they are defiantly trying to ignore. What halted their path to glory? Lack of airplay, bad promotion, poor distribution or the uncanny resemblance one of the band has to Jimmy Nail. We can only speculate but the irony is that if one of the band had fifty copies of their single fraternizing with dust in the attic and he released them into ebay world he'd probably be able to buy an E-Type Jag.

Lovely comp with such luminaries as the Gifted Children, Direct Hits, TV Personalities, Pastels, Revolving Paint Dream and the Laughing Apple featuring. It's on Whaam! so the mighty Ed Ball has his over-sized hand involved in this. Fetched a decent £62.60.

WHAT I LOST ON EBAY

Redball records released the Buzz single in 1979. The band were based in Shrewsbury, that hotbed of mischief and militancy. Not satisfied with one stab at fame they poked destiny in the chest by producing an LP but fate refused to bend and they embraced obscurity. I threw a meagre £34 at this and was not surprisingly outbid but the sale price seemed low at £46.57.