Posted by Rupert Cook at 1:10 PM No comments:

Labels: featuring tour footage from their US tour 08., Feel Good Factor by The Hermit Crabs

I DREAM OF KEEN 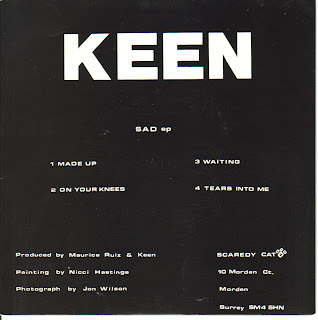 Nothing much to glean from this Keen sleeve. The back has a painting by Nicci Hastings. It's a close up of a clown, jovial and heavily made up. Does that help? Released on Scaredy Cat records in 1990 the Sad EP contains four pleasant pop ditties with female vocals. Were they an all girl band? They excel in the art of mimicry on On Your Knees which sounds like Politics by Girls At Our Best; it even has the audacity to steal one of the lines from the chorus. They appear to have been based in Morden, that dull suburb where the Northern line gives up.

They released another single called Feline Groovy which C86 collectors salivate over. I have been dribbling in desperation for it for some years now. All copies are rumoured to reside in Japan. If you believe there is a missing link between Dolly Mixture and Heavenly then I think I may have found the proof.