Ah the old homestead. I spent my crucial years (those between the ages 6-25) in ye old shit hole East Sheen. Yes that cruel chorus " East Sheen's a dirty shit hole, East Sheen we're going to burn it down" often reverberated around my bedroom. Late one night after coming back from a Marc And The Mambas gig East Sheen was indeed ablaze. Not the entire suburb but the wood merchants at the bottom of my road. I leaned out of my bedroom window and took a photo. No one thought to question the members of O Level despite the arsonist tendencies East Sheen bestirred within them. It wasn't a shit hole, just a dull suburb where the middle classes amassed against the lower life forms of Roehampton and Mortlake. We were better than them, we had a Waitrose. Oh what a day of celebration it was when Waitrose came to town. But anyway......East Sheen by O Level sells for an astonishing £132.

Here he is,in all his glory!

Labels: Getting down with the kidz

Where's Rupert? Can you spot him?

Labels: Clue-Down the front with a white T shirt a daft hat and long hair

I recently received a selection of CDs from legendary Scottish indie band The Hardy Boys. For those of you ignorant of their unjustly insignificant mark in the music world, I suggest you purchase a copy of the Let The World Smother You CD on Egg records. They released one fabulous 12" single on Stella Five records which appears to have been based in Shrewsbury although the record was produced in Edinburgh in August 1989. What the mysterious connection between Shropshire and Scotland is I am at a loss to impart.

Those involved in this essential slice of quality pop confection were Michael Bonini on keyboards, Alan Bannister on guitar and vocals, John White on vocals and guitar, David McArthur on bass and vocals and Ian McLachlan on drums. Lead track Wonderful Lie has surfaced on a Japanese comp called Pop Renaissance and you can also hear it on their MySpace page along with some other splendid songs. Hunt hard for that first single for believe me if you never hear it you should weep mournful tears as you range the Shropshire meadows in despair. Should it pop up on ebay be prepared to sacrifice that summer holiday, it's been known to sell for over £300.

The Hardy Boys formed in 1985 and hailed from Greenock. Various songs were recorded for comps in Europe and America before the Wonderful Lie single was released. Arduous touring in a battered van in 1990 failed to stir a slumbering public and the band split after a gig in the granite city of Aberdeen on December 3, 1990.

It was hardly all change though as the split amounted to nothing more than kicking John White out of the band and adapting the Human Torch's battle cry "Flame On" to Flame Up. Under this name the band they hoped to set the world ablaze. Within a few weeks John had rejoined the band but they kept the new name which, in hindsight, proved to be a mistake as a new moniker ensured getting gigs was a difficulty. There was a slightly tougher edge to their new sound which seemed more suited to the indiepop landscape of the time. Yet little impact was made despite their new material being equally as vibrant and hook-heavy as the Hardy Boys stuff. They released a 7" in 1992, Need I Say More/Mr.God, which an inattentive public failed to notice (including myself). Then in 1993 John quit the band. This inconvenience was countered by David McArthur taking on vocal duties and recruiting Brian Branford on guitar. But in 1994 they called it a day.

Was it all over? No. Michael, John and Derek Mullen recorded ten songs between 1997 and 1999 and released a CD entitled Nova Scotia. Then in 2000 Michael moved to Canada but before he departed a Hardy Boys/Flame Up reunion played a one off gig.

Is it all over now? No. More Hardy Boys gigs are promised in the future and an LP will be released in the coming months. Fortunately one of Scotland's finest bands are still conjuring up superior tunes and it's about time you listened.

Thanks to Michael Bonini for the extremely informative letter without which I couldn't have written this piece.
Posted by Rupert Cook at 10:14 AM No comments:

Noisy punkniks from Bradford the Negatives released this much sought after single in 1979. Always encourages great activity on the keyboard when Love Is Not Real surfaces on ebay. Generated a tidy sum of £127.77 for the seller.

The Outcasts had looks to match their name. Simple but effective Northern Irish punk band with a basic rawness that served them well. Though at times they make the Lurkers seem sophisticated that only makes them more endearing. Up for sale here was their first release, Frustration, on It records. Interest peaked at £58.89.

EYE ON EBAY------Panic in the streets of cyberspace

Fronted by a certain Mr. Valentine Guinness (hope that's his real name) Panic released an extremely limited red vinyl 7" around the beginning of the 1980's. Powerpop fiends were gently flustered and someone carried this prize off for £64.03. Guinness had a solo effort on the RAK label sink without trace a few months previous to this.

EYE ON EBAY------Foresight no good without hindsight

Tempted though I was to finally procure a copy of the LP The Foresight Saga by the Dubious Brothers I suffocated the raving lunatic part of my brain and let the bidding madness continue without me. Glad I was for my restraint as this elusive nugget sold for £137. Surprised me as it generally stalls around £80-£90.

EYE ON EBAY-----Let's do the spin cycle again

Rockabilly was milling around the nether regions of the charts in the early 80's but the Wild Eagles failed to glide on the trade winds. A private release in 1982, Wash Machine Boogie was backed with the more familiar Rip It Up and Twenty Flight Rock. Hopes were high for this but in the end it trundled off to a new home for the skinny sum of £7.16.

Gingerly bidding just under half the sale price, as I did, for this indie offering from Guernica released in 1987 on Idol records was a recipe for failure. I think they were Irish which might lend some significance to the title of the A side, Orange And Red. Sold for £92.

TOP OF THE CLASS 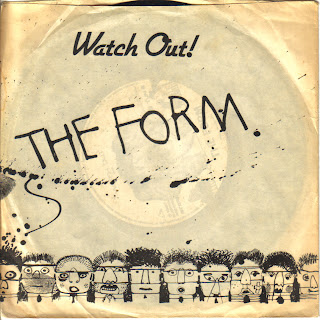 Found in a secondhand record shop in London for £25. A xmas present from the girlfriend as she saw me tugging a few raddled notes from my pocket and took charitable pity on me.
Daktari Swets on lead vocal, Pete Watt on vocals and guitar, Nick Calloway on lead guitar, Andy Hill on bass and Big G on drums made up The Form. Watch Out, a perky piece of punky pop, was released on Elephant records and has the catalogue number Tun 2 which is a teasing hint that there exists a Tun 1. One suspects they were fresh out of school, expelled or otherwise, in 1980 when this blast of juvenilia was released. Two other songs, London Underground and Start Again, lurk with potent intent on the B side. All worthy of a gold star.
Posted by Rupert Cook at 2:49 PM 5 comments:

The Form - Watch Out

From the Mike Read collection comes Stevie Sharp And The Clean Cuts. Mod revival on Happy Face which might not be so happy once you've chucked £142 at it. We Are The Mods was a rallying cry the buying public soundly ignored back in 1980.

EYE ON EBAY-----Used Needles are expensive

Anything on Ellie Jay seems to whip up a froth of interest. The Needles are a mystery to me but someone parted with £43.79 to acquire Jayneski/Gotta Know You. Did they do anything else?

Clive Culbertson's Time To Kill single never fails to make a pauper out of someone and that someone will be £153.12 poorer. This single seems to appear every few months or so but still attracts high bids.