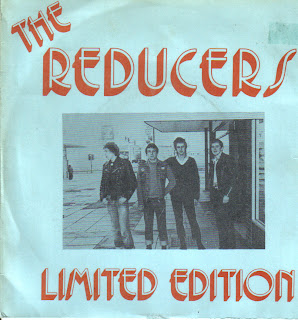 Four feral lads from Bury recorded this single in early 1978. Here we see them regaled in the armour of youth, leather and denim, bar one poor soul who has not yet received his dole cheque clad only in a v neck jumper. The premises outside which they lurk is Vibes record shop which rather than shoo them away invited them in and even financed this jagged effort. A limited edition of a 1000 singles were pressed, which these days would be an over production. Things Go Wrong/We Are Normal are raw and ragged and positively sizzle with potential. The four men involved were Graham "Raggy FC" Holden on vocals, Doug Hoyles on bass, Roy Tynan on guitar and vocals and Graham Barstow on drums. Tynan had the temerity to turn down an invitation to join the Fall reasoning that Mark E. Smith was a control freak.

Undeterred by a lack of urgency from the public for more Reducers product Vibes put out a second single, Man With A Gun, anyway. Not quite the equal in splenetic splendour as their first release it was still a fine accomplishment.

Then the men from EMI came calling and things did go wrong. Crazed keyboards roamed the land and in acts of mock castration brutally prised guitars away from their loved ones. Men who once stalked the stage like actors from an Osbournesque landscape now sheepishly hid behind tinny synthesizers. Empty Mindless Idiom released the Reducers third and final single Airways, an execrable synth pop confection, and the band were reduced to zeros.