A Scavenge In South London

Yesterday I ventured into the dark and dank South London suburbs. As capitalism teeters on the edge of the crater of oblivion I was expecting to find charity shops full to the brim with credit-crunched scourers. But the usual crowd of bored teenage mothers, escaped lunatics and muddled pensioners greeted me. It's like a convention of the careless in the community out there. Anyway I offered a helping hand to Third Finger Left Hand by the Pearls, a 70's girl group who had a substantial hit with a song called Guilty (no.10 in 1974). TFLH brooded around the top thirty for six weeks back in 1972 and was their first chart success.

Meanwhile among the LP's I had unpleasant slog through prog. Genesis, Caravan (again) and some geezer from Uriah Heep with an unremarkable solo effort. Other LP's included stuff by Nasty Pop, Charlie and Simon Boswell who ended up in Advertising (the band, not the business).
Simon's LP was called Mind Parasites and was, and probably still is, a mediocre effort according to 45 Revs. Out of desperate curiosity I bought the Charlie LP. I'm listening to it now and if I make it to the end (which I doubt) I have Inflammable Material to hand to act as an antidote.
Posted by Rupert Cook at 9:06 AM 2 comments:

The amazing Lpman returns with another punky gem. A staggering £187+ is paid for this one off release by Reacta. I paid less than a third of that for my copy off ebay about a year ago.

WHAT I WON ON EBAY

Having seen the Shitbirds' Oh Joy (it features the delectable April March) single slip through my grasp twice in recent weeks, once for £33+ and again for only £15+ I was ecstatic to see it appear a third time at the starting price of £5. I then forgot all about it and failed to bid. Fortunately nobody did and the seller put it back on at £2.50. This time it attracted a bid. But it was a tame effort and I won it for less than a fiver. One of those rare ebay stories with a happy ending.

EYE ON EBAY-----Nothing to do with Beatle George

A mad scrambling in the indiepop undergrowth was predicted when the Harrison single appeared. And so it came to pass. These Birmingham boys, or from somewhere near that urban dystopia anyway, can always guarantee a three figure sum for the seller. If you're intrigued to hear it go to Youtube and put in Harrison C86 in the search facility.

Posted by Rupert Cook at 1:54 PM No comments:

Labels: A collection of collections. Various artist LP's from the UK.

Pay No More Than 57p For Old News

There are signs of recovery in the high street; only this week I salvaged the News single 50% Reduction from a local charity shop. That's a few weeks after discovering Bloody by the Golinski Brothers in another local charity shop. Scavenging of late had been a joyless task, there's little mirth to be found in discovering piles of Yes LP's for £1 or myriad Blaster Bates LP's, notwithstanding the schoolyard smirk his name brings to one's lips. Tales of chimney blasting or topographic oceans tend to send me into a Rip Van Winkle-like slumber. I paid 50p for the News single which seemed only fair as it had Limited Edition Pay No More Than 57p emblazoned on the label. I have the A side on a comp so it was the B side that fascinated me most. Called High Society it sounds like a musical punch up between Sparks, Sweet and Classix Nouveau which may sound grim but does acquire a sneaky charm after four plays.

On a more prosaic note I also came across two Caravan LP's, In The Land Of Grey And Pink and Waterloo Lily. Now I'm not going to discuss the merits of Caravan, I hardly feel qualified to as they were a little before my time, but burdening both LP's with a £25 price tag seems excessive. That's what they're worth in the RRPG but they have to be in mint condition to deserve that valuation. A high price of £50 was tagged onto Fresh Cream by Cream. In mint condition fine but these LP's weren't. And £10 for Queen 2. That's not even in the RRPG. (Not that I'm claiming the RRPG is infallible; the News single is worth at least £20 and it doesn't merit an entry). This was Oxfam, famous for overpricing, and though I don't begrudge them getting the highest price for their wares I only hope these LP's aren't going to be sitting there for six months. That doesn't benefit anyone.
Posted by Rupert Cook at 8:03 AM 4 comments:

Green numbers indicate new entries.
Posted by Rupert Cook at 9:56 AM No comments:

Lpman returns with a single from Stockton's No Way. Only 500 copies were pressed and the sale price, a few pence short of £300, reflects its rarity. Two members of the band went on to play in the Amazing Space Frogs. One wonders what remains in Lpman's attic. Want to hear one of the tracks? Seek out a copy of Bored Teenagers 1 which won't cost you £300. If it does you've been ripped off.

Green numbers indicate new entries.
Posted by Rupert Cook at 10:49 AM No comments:

A four track EP of great rarity, the Sex, Violence And The Eternal Truth 7" contains contributions from the Dodos, Venom, Lost Boys and What To Wear. The seller had the initiative to treat potential buyers to a clip of What To Wear's We're The Martians Now which was rather wonderful. Slightly superior to anything on their earlier EP which rarely visits ebay, although when it did as a Buy It Now for about £5 I was quick to pounce. My luck ran out around the £60
mark on this though, the final total being £144.

EYE ON EBAY-------A sentiment I'd only apply to certain oligarchs

First heard Carl Gustav And The 84's on a Messthetics CD. That track was the B side, Through Birds, Through Fire, But Not Through Glass which was an interesting post punk effort. Never heard the A side, I Want To Kill Russians, but am annoyed I didn't risk a punt on this as it went cheaply.

Labels: Carl Gustav and the 84's

With that fun festival of frivolity the Elton John fashion parade, more commonly known as the Eurovision song contest, looming on the horizon like an inverted rainbow it's time to look back to a time when a punk band unsuccessfully attempted to represent England in that clownish carnival. Door In My Face was an apt title for the Fruit Eating Bears' song as they promptly had their faces slammed into it. I can actually remember seeing them perform the song on a BBC programme dedicated to find the UK representative. I think the general public telephoned in votes and I'm sure they came last. Rock Bottom, a prophetic name in view of our recent performances at Eurovision, was chosen that year, I think, sung by Lynsey De Paul and some bloke who looked like Mr. Lucas from Are You Being Served? These days a slice of vintage punk might ensure we at least get 10 points. If the atrocious Lordi can win it..............

Green numbers indicate new entries.
Posted by Rupert Cook at 8:50 AM No comments:

Extremely rare despite it being on Logo the Tinopeners 7" causes much excitement and leaves Remunj £391.60 the poorer. Highly rated by those in the know but I remain uncognizant of this record's charms. Go on, enlighten me someone.

I have visions of Lpman planning a round the world trip. His latest sale for a single by the Nothing plus twelve other 7" records raises him a staggering £1,129.62. That should get him as far as New Zealand. I know nothing about the Nothing but they mean something to somebody. 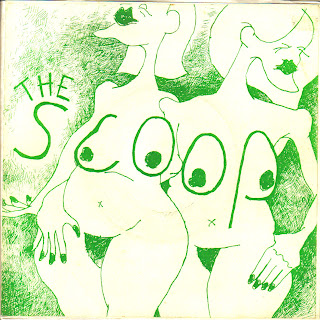 The Daily Mail, the paper which helps the ignorant become the misinformed ignorant, would shudder at this lewd cover. There is something of the MacBethian-hag-at-cauldron look about these two unashamed nudes disporting themselves on the cover of the Scoop's single. The longer I gaze on them the more a certain actress named Patricia Hodge comes to mind.

Musically the Scoop delight in amateurish mod-friendly unfussy tunes a little reminiscent of the Head. The band consisted of Martyn Clapson on lead guitar/vocals, Sam Hodgkin on vocals, James Morris on bass guitar and John Turner on drums and vocals. The record was released in the dying days of the seventies on the band's own label Sharp. In early 1981 they recorded a tape only LP before being ladled into the great incinerator of obscurity.