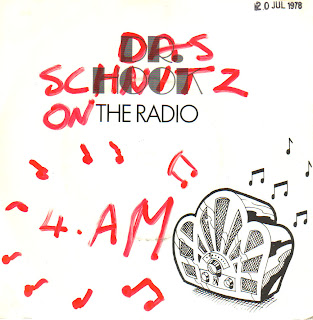 No, I didn't get a phone call from Sylvia's mother imploring I heap praise on Dr.Hook, this is a single by Das Schnitz who couldn't afford proper sleeves and so,like anarchic magpies, borrowed other artists' sleeves and customized them. This particular punk typhoon hit Torquay, the band's home town, in early 1979 when this single was released in a pressing of 533 on Ellie Jay. Some one hundred or so ended up in the borrowed sleeves before legal action was threatened by a major label claiming the customization was an infringement of copyright. Artists who unknowingly helped the Das Schnitz cause by providing the single with an overcoat include Blondie, Chaka Khan, Funkadelic and, if this isn't a fake, Dr.Hook.
The band members were Tim Dodge on vocals/guitar, Nardi Jahangiri on vocals/guitar, Stuart Gordon on bass and Kevin Perry on drums. They were 16/17 years old and they lost their gig virginity at Torquay Girls Grammar School. After that there were no worlds left to conquer.

The Men Of Westenesse came from somewhere just east of London and released this lone single in 1989. £28 is a reasonable winning bid considering I paid about £40 for my copy. Musically it's pleasant indiepop.

More indiepop, this time of an Irish nature. The seller picked this up in a charity shop I have been known to frequent so out of sheer jealous stubborness I refused to bid on it. As far as I know this is Cuba Dares only release and £44 is a good return on something which probably cost £1, he exclaims through gritted teeth.

Episode 4 released one 12" single before mutating into East Village, a band much beloved of Bob Stanley of St. Etienne. This single has surpassed the £200 mark in the past but recently it has stalled far short of that. Its final sale price of £108 is the cheapest I've seen it sell for. A friend told me that it used to turn up regularly in the bargain basement in MVE. If only I had a time machine.