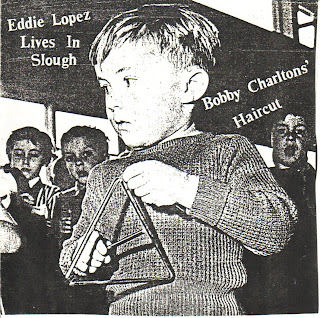 According to Eddie Cochran there are three steps to heaven, a fact that through paranormal channels he could possibly confirm for us. Now if Eddie was the curious type he would have continued climbing the metaphorical stairs until he reached ugly which, according to this band from Slough, exists on a higher plane than heaven. Despite their arcane and clumsy name Nine Steps To Ugly relish constructing a straightforward pop tune.

So who was Eddie Lopez? He was the Labour candidate for Slough in the 1987 and 1992 elections, finishing runner up on both occasions to the Conservatives. If you're anticipating a song in Redskins fire and brimstone mould you'll be disappointed. And if I have to explain to you who Bobby Charlton is I'll be disappointed. Bobby Charlton's Haircut, the second song on this flexi is, I think, obscurely referenced by the unusual placing of the apostrophe in the title of the tune as the song itself pays no tribute to Mr.Charlton's disingenuous wispy fibre formation.

Nine Steps To Ugly was made up of Tracey Owen on vocals, Jim Turner on guitar, Cameron Smillie on guitar, Nick Elson on bass and Dave Best on drums and they played their final gig in June 1989 supported by a Thousand Yard Stare.

nine steps to ugly eddie lopez lives in slough.mp3 -
Posted by Rupert Cook at 7:37 AM 1 comment: