EGGSTONE------Hatched in the garden of Sweden 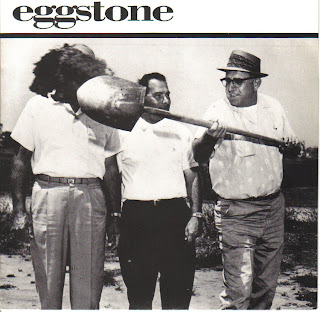 This isn't a rare Three Stooges single. Would I shovel shit of that abominable nature down your ears? It's not even Abbot and Costello plus one; no it's Swedish indie popsters Eggstone and their opening vinyl salvo released in 1990 on Das Supersound Project. Patrik Bartosch, Maurits Carlsson and Per Sunding made up Eggstone and a true representation of the band appears on the back cover. Bubblebed was joined by two other tunes, Have You Seen Mary? and See The Good Thing. Many other releases followed until 1999; since then they have been dormant.

eggstone bubblebed.mp3 -
The artist or label that owns this song has not approved full-length streaming for our users. This is a 30 second preview.
Posted by Rupert Cook at 2:41 PM No comments:

WHAT I WON ON EBAY----Fish not thrown back

I cast a line with a £20 bait and hooked a Fish John West Reject single. At that price nothing to carp about. They swam about in the Australian indie backwaters around the late eighties/early nineties. I favour the B side Twenty Ways.

I also scooped a bargain. Perhaps nobody noticed Peppelkade 14's lone single up for grabs. In the past this elusive indie 12" has heavily injured pockets selling for over £70. I snatched it at the starting price of 99p. No link to this as for some reason it's vanished from my ebay page.
Posted by Rupert Cook at 7:32 AM No comments: