Only A Northern Love Song 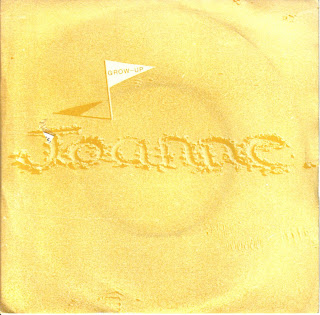 1. Many years ago, 1980, in a rainy city named Manchester a record label called Object existed. Grow-Up was responsible for one of the label's greatest pop moments. It was their second release on Object, the first featured six tracks of tentative and twisty half-formed songs. An LP called The Best Thing was an extension of ideas that had been toyed with on the debut single. Then suddenly out of nowhere came Joanne.
2.
A stop-start paean to young love among the rocks kissed by the North Sea surf, the jittery nervousness of that first crush, the awe in which the loved one is observed while doing the most mundane things, these are touchingly conveyed. "From Scarborough Harbour to Whitley Bay, I'm gonna love you for just one day", they sing and then declare, in glorious contradiction, the genius line "Will you marry me before I go gay?" If they had been a hundred miles further north they would have been Orange Juice. The b side has two tunes called "The Affirmation of Existence" and "Gggdadgadadad" so they were probably art students who eventually merged into one and became Tracey Emin, but for the sake of Joanne we can forgive them that.
3.
Another LP was released, Without Wings on the Up label, shortly before they grew up too much to devote time to an unsuccessful band. Much of the LP was more in the spirit of Joanne with occasional daring adventures into jazzy pop; their tuneful tinkering deserved more than the oblivion that embraced it.
4.
Listen to it on imeem.
Posted by Rupert Cook at 4:49 PM 3 comments: