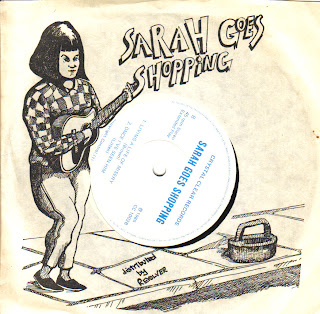 Sarah Goes Shopping released, as far as I know, just two singles on Crystal Clear records. Where they came from, who they were, these are questions I can't answer. Singer Sarah , let's call her that, utilises her delicate vocals to transport you to a charming land where Trixies Big Red Motorbike sell out gigs at the O2 and Dolly Mixture occupy five of the slots in the top ten of the singles chart. This is what Lily Allen might sound like if she were Woody's daughter rather than the roguish Keith.
Released in 1985 to a torrent of tumbleweed-like indifference Sarah and her consumerist urges parked themselves on the street accompanied by a wicker basket, a paving stone's distance away, as if its presence and function was a profound embarrassment. If you saw her busking outside Woolworths I hoped you dropped a handful of pick n' mix into her basket and then went and bought this four track EP. If you didn't you have no right to listen to this track.